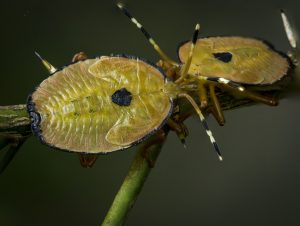 Stink bugs are not only invasive because of their propensity to invade our homes in the fall, but because they are considered an invasive species to the United States. First discovered in 1996 in Pennsylvania, these insects are quickly spreading throughout the country.

Native to China, Japan, and Korea, stink bugs are not a pest that will cause damage to our homes or bring risks to our health. However, they are a nuisance by coming into our homes in large numbers in the fall, looking for a warm and cozy place to spend the winter months. When disturbed or squished, they release a foul defensive odor, which is how they got their name.

When stink bug season is upon us, there are steps homeowners can take to try to ward off their invasion before it becomes an infestation:

Call Pest Control When Faced With an Infestation