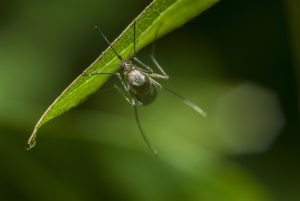 When we think of mosquitoes, we mostly think of them as tiny pests, biting as we try to enjoy a bit of backyard life. One interesting fact about the mosquito is that they like pregnant women and beer drinkers best. But, refraining from having a family or enjoying a beer on your patio is no way to live.

Why We Need to Remove Mosquitoes
As a homeowner, it’s also important to consider the diseases they can transmit. Dr. Jorge Parada, medical advisor for the National Pest Management Association, advises, “While malaria, the deadly mosquito-borne disease that plagues other parts of the world, is not prevalent in the U.S., there are several other diseases such as West Nile virus, Eastern equine encephalitis, and dengue fever that pose a threat to human health here within our borders.”
Mosquitoes are near impossible to control on one’s own because they breed continuously. Therefore mosquito vigilance needs to be continuous too. The most important thing homeowners can do is eliminate standing water around their property because that’s where they lay their eggs. And, a mosquito needs only a small capful of water to be successful.

In2Care to the Rescue
Now, there’s a family-friendly way to control mosquitoes in your yard: In2Care. In2Care is only available through specially licensed pest control companies such as Ecola.
In2Care is a new technology that lures and contaminates mosquitoes with a slow-killing larvicide that also allows them to spread it to other breeding sites. This means that it not only kills those mosquitoes that enter the trap but others within the vicinity. It kills both mosquitoes and their offspring to reduce the overall population in your yard.
Ecola is now certified to install In2Care traps where pest removal of mosquitoes is needed. Best of all, In2Care poses no harm to people, pets, or the environment. Give Ecola a call at 800-471-BUGS (2847). Learn more about In2Care and see if it’s right for your yard so you can enjoy outdoor life in a T-shirt and shorts again.